Major cloud outages are rare, but local internet service interruptions are not, so we've always had multiple connections to the web, but at various speeds.  Placing our data and websites on the cloud yet directly under our control gives us the best of both worlds.

It also means lower power bills this summer; at full blast several years ago, the server room was sucking in more than 2000 watts of power which mostly turned into heat.  In Las Vegas, chilling a server room when it's 117 degrees outside is expensive and noisy. 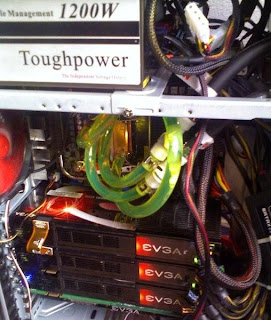 Even liquid cooling doesn't negate the laws of thermodynamics.  The PC above had a six core CPU and seven (7) GPU's to run six virtual machines locally for six different clients/VPNs.  The machine had to run all the time, in use or not.
Home